Think of surveying, measuring and mapping today and it is hard not to think of drones, satellite technologies, GPS and all the wonderful technologies that the modern surveyor relies on. Even the humble total station is an impressive technological feat. But it goes without saying that these technologies are more recent marvels.

In fact, throughout history the surveyor has had to rely on tools that were considerably less sophisticated than that which they have access to today.

Proof of what early Egyptian surveyors could help achieve: the Great Pyramid of Giza, or Khufu’s pyramid.

Surveying has its roots in the ancient world and as you might imagine, back then much of the equipment was considerably less hi-tech.

In fact, in Ancient Egypt the most useful piece of equipment in the surveyor’s arsenal may have been a length of rope. After all, the Egyptian word for surveyor roughly translates to ‘rope stretcher’. Other items in their stock and trade included a levelling instrument shaped much like an A, and a long thin instrument called a cubit rod.

Ancient Egyptians also came up with a system of measurement based around the human anatomy – essentially, measuring things with the length of their arms, palms and fingers.

Surveying was so respected as a skill that on particularly important construction projects, a pharaoh would sometimes take on the mantel of head surveyor and aid with the ceremonial rope laying.

Despite the comparatively unsophisticated nature of some of the tools employed by ancient surveyors, our ancestors may have had us beat in some respects – don’t forget to check out our blog from last year about Plimpton 322, the clay tablet from ancient Mesopotamia that may completely revolutionise the maths we use in today’s surveying practices.

Towards the 21st Century

The modern era of surveying is often seen as beginning with the exploits 18thand 19thcenturies – the golden age of the profession. 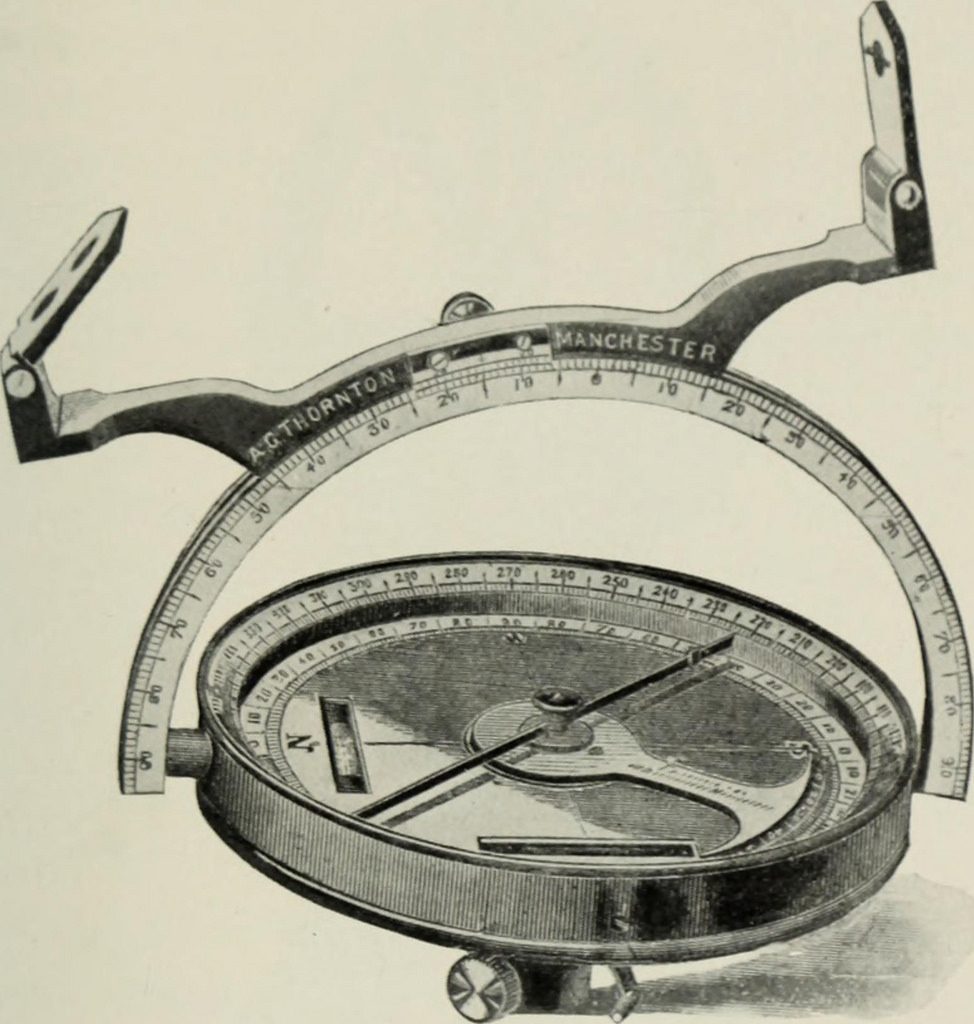 A diagram of a 19th century surveying mainstay, the circumferentor.

Much of the modern world was first mapped in this period, from the Americas all the way to, of course, Australia. Surveyors were often on the front line of exploration, and as such they frequently spent long, hard months away from family, amenities and civilisation in order to get the job done.

The equipment at hand had obviously advanced since the days of the pharaohs, but were still simplistic compared to what surveyors now take for granted. Regulations set out by the New South Wales Surveyor General in 1864, for example, point to what was found in the average surveyors’ toolkit – three measurement chains, one circumferentor (or surveyor’s compass) and one theodolite (a precision optical instrument that surveyors used to measure angles horizontally and vertically). Items such as rulers and protractors were added to subsequent regulation documents in the last 19th century.

You can read up further on the challenges that faced the early Australian surveyors in our blog from last month.

While some of these pieces may seem hopelessly outdated from our vantage point in the 21st century, many of these surveying artefacts were considered by contemporary scientists and inventors to be amongst the most advanced scientific instruments then available.

That surveyor’s chain belongs in a museum!

Today, such equipment is highly sought after by collectors, museums curators and surveyors with a keen sense of history alike. In fact, if you call Victoria home, you will find some examples of legitimate 19th century equipment on display in the Melbourne Museum. Queenslanders may want to visit the Museum of Lands, Mapping and Surveying, while South Australians can head to the Bay Discovery Centre Museum in Glenelg. The University of New South Wales even has an online museum of surveying instruments that you can investigate at any time here.

While there is still an old-fashioned romance to the measurement systems of yesteryear, if you decide to step into a career as a surveyor, you will find yourself working with much more modern equipment. You can learn more about that right here on our website – and afterwards you can dig a little deeper into your study options.

A Return to Campus Surveying

NSW Women’s Week Puts Women in Surveying on the Map