Surveying: an Esteemed Gift from the Gods?

What do writing, mathematical symbols and land surveying have in common?

They were all invented in ancient Mesopotamia thousands of years ago.

The history of surveying is a fascinating one. Thanks to the archaeological endeavours of the last 150 years, we now know a little more about the role surveying played in ancient times, and how it helped build the foundations that our society rests on today.

But it is the discoveries of the last year or two that have really illuminated how ancient people approached the subject of surveying. In fact, it came down to an Australian effort – Dr Daniel Mansfield and his team at the University of New South Wales – to decode a message from ancient Mesopotamia that could have a real impact on how surveying is practiced in the modern day.

Could it be that the experts of 4,000 years ago had a better idea of how to approach surveying than us? It seems that at the very least, they certainly could give us a few pointers.

First though, a little background history…

A History Scribed in Babylonian Clay 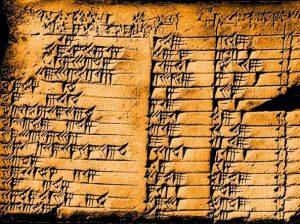 Religion, myths and gods were at the heart of many ancient cultures, and Mesopotamia was no different. As such, surveying was viewed as a divine gift from the gods.

This is backed up across Sumerian sources and literature, where we have found references to land surveying as a practice delivered to human beings by higher powers. In fact, there are depictions of gods bestowing surveying instruments to mortals, found on art works dating back over 4,000 years.

The purported creative and architectural gifts of the Sumerian god of wisdom, Enki, were praised in hymns in ancient times. Enki was said to have been directed by Enlil, the chief deity amongst Mesopotamian god figures, to make the world an orderly place.

It makes sense then that the earliest evidence of a land measurement system modern scholars have found was inscribed in clay tablets from Ancient Mesopotamia, dated at approximately 3,500 BC. This was a time of great creativity, with the invention of writing, lettering and numerals over the course of a relatively short period. The creation of numerals and writing, it seems, was soon followed by their implementation in land surveying practices.

These clay tablets tell that story – and show us that in some ways, maybe the Ancient Mesopotamians had a better system at the base of their surveying efforts than we do today.

From Mesopotamia With Love

It was one of these clay tablets – nicknamed Plimpton 322 – that proved key to Dr Mansfield and his team’s research. So key, in fact, that they view it as one of the most sophisticated scientific artefacts of the ancient world.

In essence, Plimpton 322 is an ancient trigonometry table.

This rewrites our understanding of ancient mathematics and surveying practices. For one thing, historians previously thought that trigonometry was invented by the Greeks – but here they find the Mesopotamians were devising trigonometry calculations around 1,500 earlier.

But it is the method of their calculations that may have the real impact on how surveying works in the future.

This approach, it transpires, is simpler and more precise than the approach we use in modern trigonometry which utilises angles and base 10 in calculations. Babylonian mathematics instead used ratios (not angles) and base 60 calculations.

What Does this Mean for Today’s Surveyor?

For decades researchers had supposed the Plimpton 322 was a scribal text used in ancient schooling, not the potentially revolutionary calculations that were thousands of years ahead of their time.

In terms of surveying – a practice which relies on accuracy at all times – Plimpton 322 shows us a way to gain greater precision. The question now becomes for today’s mathematicians and surveyors, how does transitioning from our current decimal base system to the Babylonian’s richer base 60 process work? There’s a fascinating road ahead…

Previous post Listen Up! The Field Book is On the Air Next post Students’ love of mathematics take flight