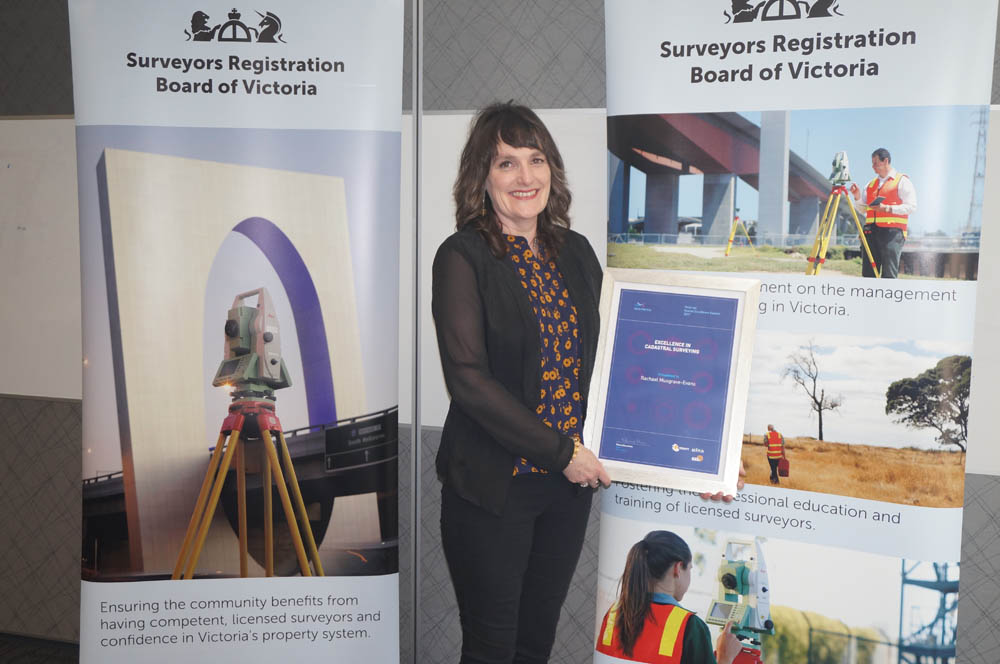 Rachael Musgrave-Evans is the Managing Director of Musgrave-Evans and Gilbert Consulting Pty Ltd, a land surveying and town planning consultancy in Central Victoria. She has been a licensed surveyor in Victoria since 1992 and has a Bachelor of Applied Science in Surveying with Distinction (RMIT), alongside a Master of Social Science in Environment and Planning (RMIT). Rachael is also a current member of numerous bodies, including the Surveyors Registration Board of Victoria, the Institution of Surveyors Victoria and the Planning Institute Australia.

Rachael has worked in the surveying profession for nearly 30 years. Throughout this time she has always had a strong belief that dedication and proficiency are vital in the field of surveying. As a prominent and accomplished professional, Rachael has helped set the path for women entering the surveying field.

How did Rachael first hear about surveying and what attracted her to it?

Rachael first heard about surveying from her mother, who was looking through the VTAC guide after Rachael had completed HSC. Surveying was attractive to her due to her interest in maths and physics, which are both used heavily in the field of surveying. Another factor was that Rachael had restored a Series 2A Land Rover when she was in her late teens, demonstrating the practicality needed to become a cadastral surveyor. In 1989, Rachael graduated with distinction from RMIT and within the minimum two years she became a licensed surveyor, only the third female to do so in Victoria.

Where has Rachael’s career taken her since then?

From working part-time on drafting and planning matters while raising children, to launching her own business, through to her appointment to the Surveyors Registration Board of Victoria, Rachael has enjoyed a broad and distinguished career.

Since 2006, in conjunction with her husband Graeme Gilbert, Rachael has successfully managed Musgrave-Evans and Gilbert Consulting Pty Ltd. As well as running her own business, Rachael has been a licensed surveyor member of the Surveyors Registration Board of Victoria and a committee member of the Institution of Surveyors Victoria since 2008.

On the Surveyors Registration Board of Victoria, she is currently the moderator of the Rural Cadastral and Professional Assessment projects, the chair of the FPET committee, and a member of the University Accreditation Committee. She also examines projects and sits on various disciplinary panels conducted by the board.

In addition, Rachael lectures in cadastral surveying at RMIT and residential land development at the University of Melbourne.

Rachael has also been the recipient of numerous awards for her outstanding work in the field of surveying, and was the first female to be elevated to Fellow of the Institution of Surveyors Victoria.

How does Rachael view surveying as a career to young people?

Rachael is passionate about the profession of surveying. For her, it is important to the future of the profession that surveyors value their qualifications, build up their skillsets, and pass on their knowledge to the next generation.

Rachael recognises the significance of the role that licensed surveyors play in the economic development of the state. She also sees surveying as a rewarding career for any young person with an interest in maths, physics, IT, being outdoors – or all of the above.