The History of Surveying

Surveying has been critical to the development of modern society.

Across the centuries, surveying has helped our ancestors map their terrain. It has laid the foundations for our roads and cities. It even played a core role in the legal division of parcels of land. The boundaries of our natural and constructed world are determined by the work of surveyors – and they started working quite a long time ago.

On this page, we will take you through an overview of the history of surveying. There are a number of articles on this website that unpack surveying’s history from specific angles. You can find a list them at the end of this page, but first and foremost, this is definitely the place to start learning about how surveying has changed across the years. 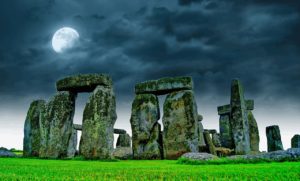 Stonehenge may have involved input from early surveyors

Experts believe that the creation of Stonehenge was set out by the surveyors of the day utilising peg and rope geometry. This was over 5,000 years ago, and one of the earliest known concrete examples of surveying work.

Surveying has been around as long as significant structures were being erected. In Ancient Egypt, the pyramids stand as evidence of surveying expertise. More than this though; land boundaries were determined by Ancient Egyptian surveyors, utilised for both taxation purposes and to determin land ownership. Meanwhile, at the Nile River, surveyors were constantly reassessing boundary markers to ensure that overflows of the river could be tracked and buildings and construction projects could be kept safe.

The tools of the ancient surveying world

As the centuries passed, surveying practices developed. The ancient world still holds a few secrets, however, including fascinating stories such as the Ancient Mesopotamians’ use of mathematics – seen in the 20th century discovery of a clay tablet outlining an approach to measurement quite different from, and perhaps more effective than, ours today. You can read an in-depth breakdown on this here.

It was during these ancient times that surveying technology developed beyond rods, ropes and markers. One early surveying instrument was the groma, thought to have originated in Greece or Mesopotamia before making its way to Rome. Formed using a vertical staff with horizontal cross-pieces mounted atop and four weighted ropes, the groma gave its user a greater chance to survey straight lines, right angles and rectangles. Instruments such as this – and the surveyors who used them – would have been integral to Rome’s impressive empire growth in this period.

One item the Ancient Greeks were certainly responsible for was the diopter. Similar in effect to the theodolite, set to emerge centuries later, the diopter was more accurate again than the groma. It may have been sophisticated enough to aid with the construction of the Eupalinian aqueduct.

The Greeks also used their formidable geometry knowledge to push the art of surveying further forward, even going so far as to standardising surveying practices. Surveying was seen as a noble pursuit, with boundaries and measurements assigned their own celestial figure in the Greek god Terminus.

There is a lot more information about surveying in the Ancient world on this website; explore here.

A page from the Domesday Book

Jumping forward well over a thousand years, we come to a significant event in the year 1086. It was then that England’s William the Conqueror ordered the completion of the Domesday Book, a record of landowners the plots they occupied. This was a massive undertaking, defining the exact boundaries on personal property.

From the date of William’s order in 1085, a total of 13,418 items were recorded. This encompassed more than rural land parcels, although that was certainly the focus: other records transcribed included the boundaries of whole counties and towns.

While some inconsistencies arose – and some of the execution was imperfect – the development of the Domesday Book was arguably surveying’s tallest order to that point. Having a record like this was deemed of particular importance during the years of feudalism in England, when the king was considered the only true owner of land in the nation. Accounting for the land occupied by his underlings was key when approaching the subject of tithes.

The march to today

In the centuries since William’s Domesday edict, technology evolved significantly and speedily. So too did the role of the surveyor, with many scientific discoveries impacting the surveying world.

Just a three or four centuries into the future, the theodolite, a key item in the surveyor’s toolkit and the grandfather of today’s total station, was formally in use at surveying set outs. By the late 18th century, British mathematician Jesse Ramsden was revolutionising the profession with high accuracy surveying instruments – including a perfected version of the theodolite. At the dawn of the industrial revolution in the 19th century, surveying was booming, as the demand for road, railway, canal, building and city constructions grew like never before. To match this, the equipment grew ever-more sophisticated.

With the 20th century and the arrival of computer technology and orbiting satellites, surveying was set to change once again.

The future of land surveying

Surveying has only continued to develop in the years since, with technology and equipment becoming increasingly advanced and digitalised. GPS and 3D imaging have been added into the mix, but not surprisingly the basic methods of land surveying have remained the most prominent.

There is much more to the history of surveying than what we have laid out here, of course. You won’t have to go far to learn more though; on this website, there is a lot more to explore.

Surveying may look very different from how it appeared 5,000 years ago, but many of the fundamental principles remain the same. No doubt the future will hold more surprises still…