Drones are one of the most important – and eye-catching – items in the modern surveying tool kit. Their application has revolutionised the surveying profession, opening a huge array of possibilities that yesterday’s surveyor could only dream of.

Not only that, but their use saves surveyors valuable time and money.

This page will go in-depth into drones and surveying. We’ll outline what drones are used for, how accurate they are, and which industries can benefit from drone surveying. But first, let’s start with a bird’s eye view of drone history.

The history of drones 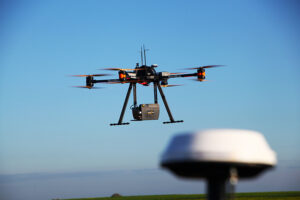 Unmanned aerial vehicles, or UAVs, have been around longer than you might think. In fact, we’re heading back to middle of the 19th century to mark the first.

UAVs became more sophisticated over the years. War was a frequent motivator for these innovations – World War I saw pilotless aerial torpedoes developed, and the first remotely-piloted vehicles were produced during World War II, the brainchild of a model airplane enthusiast. Across the years, UAVs were utilised for a range of reconnaissance, combat and decoy missions.

By the late 20th century, drones came in all shapes and sizes and with all types of capabilities. By then, it wasn’t just UAVs’ military applications that were obvious. Their potential use as a data collection and an agricultural tool was becoming clearer. It was only a matter of time before drones became commercially available – and therefore ready to make their mark on the private sector.

And that leads us to today. Drones are delivering packages to people’s homes; they’re used for policing and surveillance. There’s even a drone racing community! But for the surveyor, drones have opened up a world of topographical surveying possibilities.

Topographical surveying produces a three-dimensional map of a piece of land, taking into account all the surface features, whether natural or man-made. The resulting data communicates the piece of land’s elevation, size and minute detail. 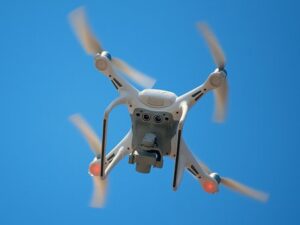 Surveying drones are set up with an RGB camera, which allows the UAV to capture data from the air. In order to ensure the information collected is comprehensive enough to provide absolute accuracy, the drone will photograph the ground multiple times and from multiple angles, with each image receiving its own geo-coordinates.

This is the base data. When fed through photogrammetry software, this data can be used to create 3D maps, elevation models and more.

So, in essence, this means that drones can achieve a lot:

• They can map automatically: if the surveyor has set up sufficient ground control points, drones can be set on an automated flight path
• They can be used by cadastral surveyors: drones can capture property boundary data quickly and efficiently, which has major applications in real estate and property development scenarios
• They create LiDAR mapping: drones have the capability to register pin-point accurate representations of buildings, topographical features and objects

You’re probably already beginning to see some of the huge advantages that drones can offer surveyors in the field.

First and foremost, you’d have spotted the time-saving benefits. Traditional surveys can often take a number of days or even weeks, depending on the size and intricacies of the land that needs surveying. A drone can often collect its data and imagery in mere hours, leaving a lot more time to sort through that data thoroughly.

Drones can also be very cost effective. Firstly, there will often be smaller on-site personnel requirements, and drone pack-down and maintenance are both uncomplicated. Additionally, some of the work of surveying drones was previously conducted through manned aircrafts and satellites – drones prove a much cheaper approach than either of those options!

Accessibility is another benefit. Drones have the capability to reach locations that may otherwise be difficult to map. Remote areas, rugged terrain and near impossible to reach places are not an issue.

Finally, for a profession that prizes accuracy, drone technology meets the bar. Drones can be equipped with scanning technology that can produce images at an extremely high spatial resolution. With the freedom to collect topographic data from a variety of angles, drones can often provide every perspective.

Where will our technology take us next? 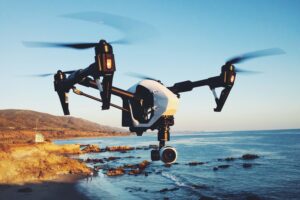 It’s unlikely that the surveyor of 200 years ago thought that the first UAVs would have applications in surveying, but as we can see, those applications are many. What will be the next technological advance seized upon by surveyors?