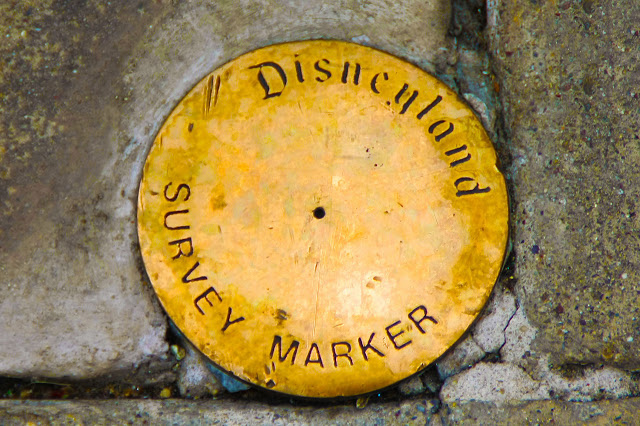 By the 21st century, the name Disney has become so synonymous entertainment and childhood escapism that the cliched idea for the perfect holiday destination is, “Disneyland”.

Disneyland and all the other associated Disney Parks around the world have many things in common. They all celebrate the characters and stories of Walt Disney’s cartoons and films.

Oh, and one other thing. They’re all filled with the surveyor’s calling card: survey markers. 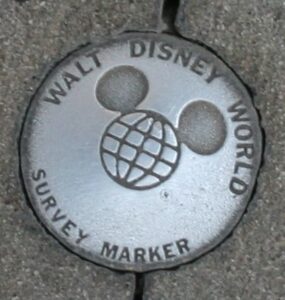 First things first, you may be asking – what exactly is a survey marker?

Markers often take the form of metal emblems stamped into the ground. They signal to any surveyors who come across them that they have arrived at a key survey point.

Surveyors place them as reference points, which come in handy when they themselves expect to return to a location, or for future surveyors who may need to re-establish property boundaries quickly and with a minimum of fuss.

More specifically, surveyors use them when conducting triangulation calculations; as a fixed point that was used by a previous surveyor, they act as an accurate guide for any future measurements.

In 1964, Floridian surveyor Bill Hart met with a man who wanted thousands of acres surveyed as soon as humanly possible. Little did he know that his client – the man’s employer – was Walt Disney, and that he would be setting out a parcel of land that would eventually become known as Walt Disney World.

The land Bill and his team were surveying was vast, swampy and treacherous. It was hardly a simple job, and Mr Disney wanted things completed in record time. To meet the challenge, Hart and his team worked overtime, including logging hours on Christmas Eve. Hart even made use of some complex solar equations to produce a Cartesian coordinate system that ensured that measurements were pinpoint accurate.

And there was a lot of ground for him and his team to cover. Disneyland, the first of Walt Disney’s famed attractions, had opened nine years earlier, and Walt Disney World was set to be bigger, more imaginative and more impactful than its predecessor. In fact, Walt Disney World Resorts – initially featuring three resorts, two golf courses and the Magic Kingdom theme parks – became the largest theme parks in the world.

While Disney passed away in 1966, that didn’t stop the development of the project, with Walt’s brother Roy taking over. Today one theme park has become four, while there are dozens of different resorts for guests to choose from. 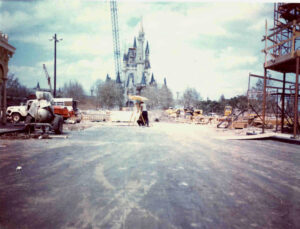 The work surveyors put into the Walt Disney World property is unlikely to ever be forgotten, thanks to the extensive network of survey markers that are proudly stamped across its parks and resorts.

It is clear that the markers have been included for guests to spot. With each marker blessed with an attractive design, some visitors make it a part of their visit to track down the markers and photograph them, seeing as they represent a rare instance of Disney allowing the real world to step into a park celebrating fiction. There are quite a few to find – today, there are over 80 Disney survey markers throughout the property, covering all four theme parks, the water parks, most of the resorts, and in other nooks and crannies.

The measure of the future

A Return to Campus Surveying