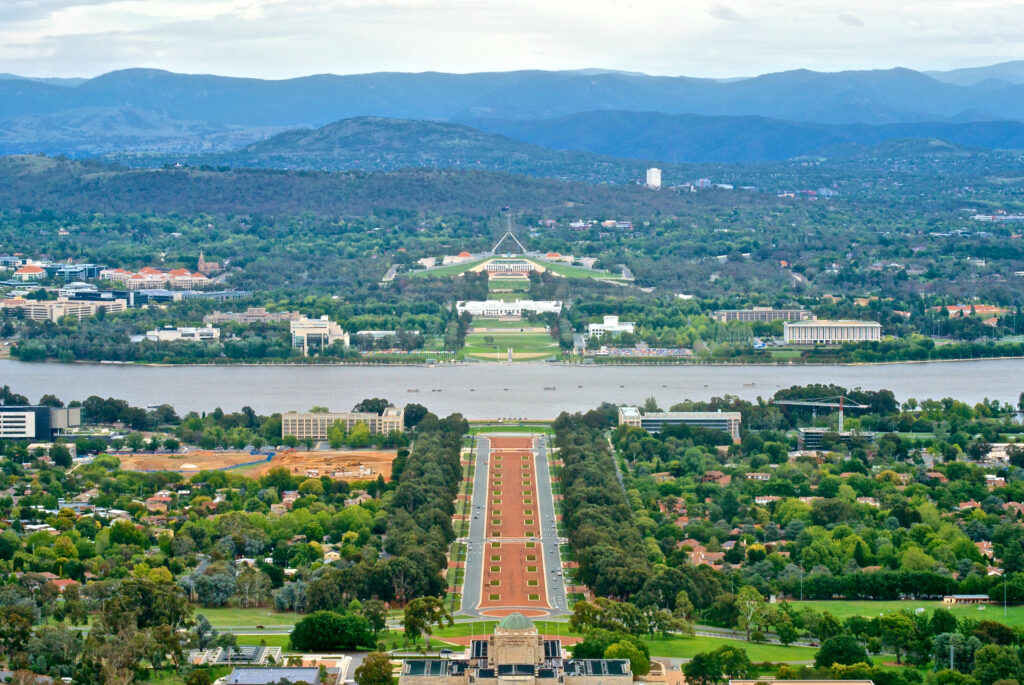 How Surveying Mapped Out Our Capital

Surveying’s inpact on Australia can be measured all around us.

Even on this website you can see just how inportant surveying has been in building Australia and the world up. In the past, it’s helped determine our state lines. Today, one of its many roles is to help determine property boundaries. In the future, it could continue to support us in our quest to conquer Mars.

But did you know that the very location of our country’s capital city was down to the work of surveyors?

Canberra wasn’t always set to be Australia’s capital. In fact, there was a time when the Australian Capital Territory wasn’t even nestled within the belly of the New South Wales map. This month’s blog, however, will explain how the ACT and Canberra came to be…

Like so many things in Australia, the story of our nation capital starts with a rivalry between Sydney and Melbourne.

As the matter of federation was debated upon in the later 19th century, the arguments as to where to hold a hypothetical federal parliament began. While Sydney stood proud as the oldest Australian city, Melbourne was, at the time, the most prosperous, thanks to the Gold Rushes. Advocates for New South Wales and Victoria wouldn’t back down. Each was not only adament that their city must be the capital, but also even more adament that the other city mustn’t.

The result was stalement, which turned to compromise. While Melbourne would stand as temporary capital, a new city would be built to serve at the final capital. It was determined that this new location would be found somewhere between Sydney and Melbourne – which is where 19th century surveying know-how would come in…

Following Federation, the search was on to find the perfect place to act as the seat of Federal Parliament – AKA the Federal Capital Territory, later renamed the Australian Capital Territory.

Former Surveyor-General Charles Shrivener was responsible for surveying sites across southern parts of New South Wales, with the view for future construction of the capital city. Stipulations from the Commonwealth Parliament members meant that the area had to fulfill certain obligations. For one thing, it had to be a minimum of 100 miles away from Sydney. For another, the parcel of land within Shrivener’s boundaries had to have access to high quality water catchments.

Interestingly, the parcel of land that Shrivener ended up submitting was slightly different from the one that was original ceded by the New South Wales government to the Commonwealth.

Scrivener planned to include two river catchments – Queanbeyan and Molonglo – and the Queanbeyan township itself. New South Wales instead wanted to replace this segment with the Gudgenby, Naas and Paddy’s River catchments, an amendment that was ultimately accepted. As it turns out, the replacement land was actually pristine, and the water quality in Canberra catchments is, to this day, amongst the very highest in the country.

It is this disagreement over water that lends the final Canberran map its odd shape. If Shrivener’s original suggestion had been taken up, Canberra would today form a shape more like that of a horseshoe, as seen in the map above.

The work that went into producing Shrivener’s contour map was signifcant. He had to survey mountainous ranges, rivers running north to south, water catchments, and treelines.

Today, Charles Chrivener’s work is represented in the existence of a renowned capital city. Canberra stands as a monument to democracy, the home of our Federal political system. The city itself – and its roads, buildings and architecture –  is of course also representative of the work of surveyors, who are frequently the first professionals on site at a project’s outset.

To read more about surveying, civil engineering and construction, you can peruse this web page here.