The world of surveying is changing, with an increasing number of female surveyors in New South Wales entering the historically male-dominated profession.

Graduate Surveyor, Belinda Serafin came across surveying at a UNSW open day after initially showing an interest in engineering.

“What appealed to me most was the focus on maths and the mixture of both outdoor and indoor work,” she said. “No two jobs are the same so there are always new challenges.”

Belinda has been working for six months as a Graduate Surveyor for Sydney Trains, where she regularly performs engineering surveys used to support the design and construction phases of projects to upgrade or maintain railway infrastructure. 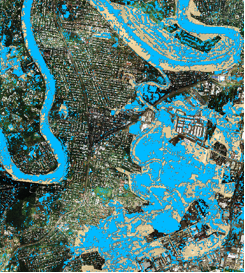 She recently won 3 UNSW 2017 Graduation prizes for her outstanding performance over the 4 year undergraduate degree. These included The Institution of Surveyors NSW Prize, The BOSSI Medal, and The Association of Consulting Surveyors’ NSW Prize.

She also won the NSW Excellence in Surveying & Spatial Information Award 2017 for her University project: Urban Flood Mapping and Modelling of 2011 QLD Floods Using Remote Sensing. Belinda is an excellent role model for young people aspiring to enter the profession, and also for young female surveyors breaking through previously held stereotypes that surveying is a male oriented profession.

LTS Lockley is just one of the NSW surveying firms leading the way in creating gender balanced workplaces, with a female General Manager, CAD Department Manager, and a number of female surveyors including five field party leaders, one Registered Land Surveyor and one Female Candidate Land Surveyor.

“Our experience with our female surveyors continues to be overwhelmingly positive,” said LTS Lockley’s General Manager, Tiffany Wagstaff. “We will continue to champion their cause and celebrate their success in our industry as we proudly advocate women in the workplace.”

Women are being encouraged to pursue studies in surveying with a new surveying scholarship eligible only for women recently created by Australian surveying, design and planning company, Veris.

Recipients of the scholarship, students studying either surveying or geospatial engineering at the University of New South Wales, will receive $10,000 per annum for four years. They may also have the opportunity to do industrial training with Veris during year 1, 2 or 3 of their course. Find out more here.

“Surveying is currently a male dominated profession, and we are also facing a significant skills shortage,” she said. “I hope that my appointment to the role can be an example to young surveyors, in particular females, that there are a wide variety of career options available to them.”

Narelle will be one of the special guests among several female leaders in the STEM professions (Science Technology Engineering Maths) at the upcoming ‘Empowering Women in STEM Congress’ in October. With various keynote addresses, Q&A panels and open discussions, this event is just one of the ways leaders in NSW, both women and men, are working together to advocate for women in STEM careers.

WA also recently appointed its first female Surveyor General. Dione Bilick comes with a wealth of experience, having worked for the Western Australian Land Information Authority, also known as Landgate, for 16 years prior to her appointment.
Of her new role, Ms Bilick said: “I am highly honoured, both to be the first woman and because of the calibre of gentlemen who have held the post. Surveying has generally been a male-dominated profession but, like so many of the sciences, more and more women are now choosing it as a career.”
Previous post Futures discovered at USQ Engineering and Surveying event Next post Geomatic Technologies Women in Geospatial Scholarship (RMIT students)