Students unearth a little of our ANZAC history

School students at Douglas Park Public School received a history lesson, a geology lesson and a surveying lesson all rolled into one when on November 10th they took part in the ANZAC Memorial Centenary Project.

One of many schools from around New South Wales involved in the initiative, Douglas Park High School may be small – with less than 150 students enrolled – but it’s big on heart. These little learners found out how a professional surveyor works as they did their bit to commemorate the fallen in time for Remembrance Day, November 11th.

Read on to get some background on the project, its relation to the field of surveying, and how the Douglas Park Public School students got involved…

A centrepiece of this project is to be a public artwork created by celebrated artist Fiona Hall. Her concept calls for 1,700 plaques, each representing a town, suburb or locality where men and women enlisted for service – and each plaque will feature a small soil sample from that location, symbolising the home soil that many who fought for our way of life never returned to.

That’s where surveyors from around the state have stepped up. The Department of Veterans Affairs welcomed professional surveyors’ help in assisting communities, parks associations and schools locate these soil samples.

Not only was this project an important way of remembering those that fought for Australia – it also provided a chance to show young kids how the often-misunderstood profession of the surveyor really works.

Digging in at Douglas Park

Staff at Douglas Park Public School called on Craig Palmer, a surveyor with JMD Development Consultants in Campbelltown, to pop by and show the students how the surveying process runs. 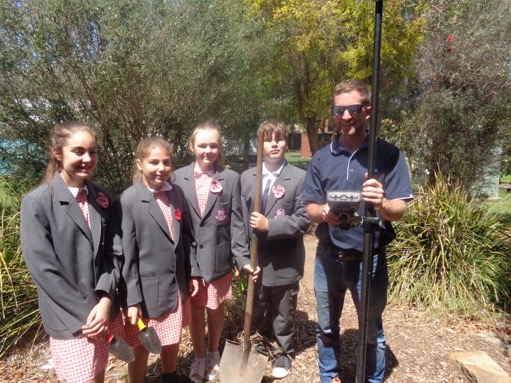 With a little determination, elbow grease and know-how – not to mention some of the tools of the trade – the group managed to pinpoint the soil sample successfully, and bagged it up for inclusion in the ANZAC Memorial Centenary Project. The personnel involved on the day at Douglas Park will also be recorded as part of the program.

“This exercise was a good exposure to surveying for the students who were interested and engaged by the use of satellites to establish the position of the dig site,” Craig remarked. “I feel the experience was helpful in the exposure of surveying to the students, as surveying is often a profession that is an ‘unknown’ to much of the general public.”

The event was also a chance for students to reflect upon the sacrifices that yesteryear’s brave men and women made for us. To recognise the significance of the project taking place the day before Remembrance Day, they created red paper poppies for use on their school’s memorial wall.

The surveyors behind the scenes

The process of collection soil samples from all around New South Wales is a huge undertaking, and a lot of the organisational work has been down to the New South Wales Office for Veterans Affairs and the Geographical Names Board, with assistance from the DFSI Spatial Services.

To find out more about what Spatial Services does and how they get the word out about the field of surveying, visit their website.