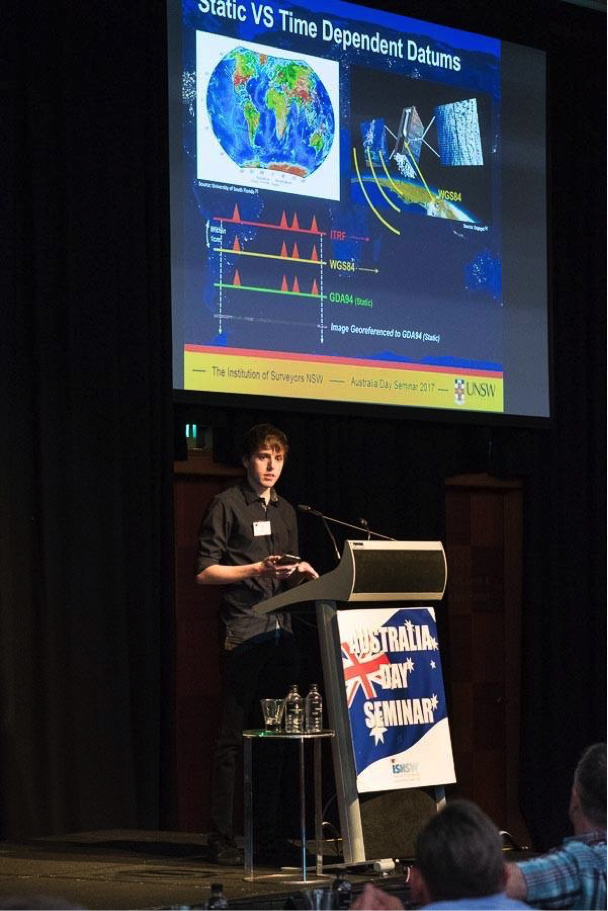 Imagine you are out and about, and you open up Google Maps on your smartphone to find out where you are. You see an aerial photo and your little blue dot comes up to show you your position in relation to all the trees and buildings around you from the top down.

We live in a world of continental drift with plates moving underneath us all the time. Currently our blue dots which are determined in real time would move along with the plates, while the aerial photo underneath remain fixed.

At the moment, the size of blue dots are about 5 – 10 meters so we don’t notice it – but what happens in the future when smartphones can get position down to around 10cm and people start to wonder why their blue dots aren’t lining up with where they are?

My project was an investigation regarding the future challenges of commercial mapping and navigation products dealing with next generation datum positioning in real time at decimetre level accuracy.

In modern times, digital mapping products are a common means utilised for general positioning and navigation. Due to the increased accessibility of spatial information provided by these products, the adoption and popularity of navigation tools outside the spatial sector has risen significantly.

This project looked at the current georeferencing accuracies of different mapping software such as Google Maps, with comparison to high-resolution UAV images and field collected GNSS observations.

The reference frames used by each of these software packages to georeference their images was also discussed in relation to the effects of time dependent datums. GIS and mapping products georeference images at a specific epoch and each remains at a fixed coordinate. However, day-to-day GPS data collected by a hand-held receiver would present position relative to WGS84, a datum regularly updating coordinates with linear velocities.

This raises the issue of user positions determined by GPS becoming continuously further offset from the map images which are underlaid. When hand-held devices are able to achieve decimetre accuracy, this issue within mapping products will become more and more apparent.

There are Plate-Fixed reference frames, which are static such as Australia’s current datum, GDA94. There are also Earth-Fixed reference frames such as the ITRF which are time dependent. Due to geodynamic effects such as tectonic plate motion stable points on the Earth’s surface do not remain fixed and move with continental drift and ground deformation. Time dependent datums account for this effect by defining points in four dimensions, with their relative velocities. This means the 3D coordinates of points in these datums, change over time.

GPS single point positioning, provides receiver location relative to the WGS84 datum a reference frame closely aligned with the ITRF at any time. The GPS datum can therefore also be thought of as time dependent. Typically, GIS represents images and feature positions statically at a particular epoch. This provides a consistent means of comparing coordinates, to carry out analysis of the spatial data. An issue arises when positions derived from time dependent datums are plotted relative to static datums, at different epochs they won’t align properly.

To make sure in commercial mapping products that the backing image stays aligned with a user’s blue dot over time how important it is to update an orthophoto with a time dependent transformation is a function of its pixel resolution which changes depending on how zoomed in you are and how much the plate has moved since the reference epoch of the image’s georeferencing. This is only the case however if the image is perfectly georeferenced.

With the current accuracies of mapping products applying time-dependent transformations won’t be an important issue anytime soon. Because currently the main reason a user’s blue dot is going to be offset is because the image is in the wrong place to begin with.

Read more about Aaron and the start of his working career as a Survey Assistant here.