The 2015 Pinery bushfire destroyed 97 homes, 83,000 hectares and claimed two lives and local landholders are still feeling the effects of the blaze, two years on.

Third generation Pinery farmer Paul Guerin said the destruction of fences in the fire has made it difficult to determine land boundaries. 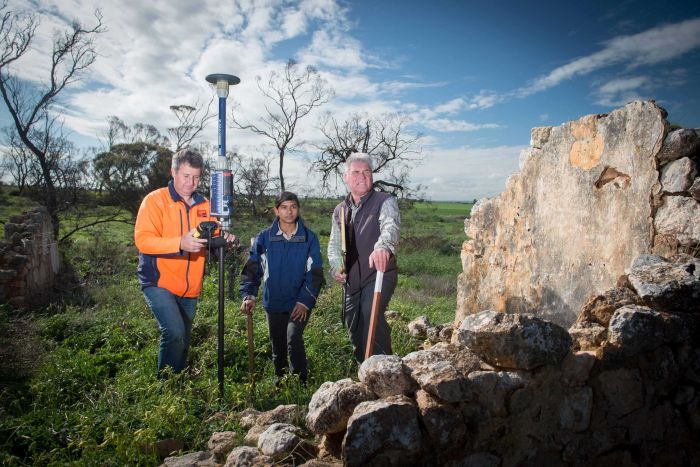 “I was around when my father re-fenced the boundary perimeter and internal fences of the property about 40 years ago. It was a family affair to do it together,” he said.

“It was the destruction from the trees that destroyed the fences, and it took out the two major strainer posts on the western boundaries and corners of the property.”

Following the six month voluntary surveying project however, boundaries are now accurately defined for eight landholders, allowing the land to be re-fenced.

The surveying team included several licensed surveyors and 12 Masters of Surveying students from the University of South Australia.

As much of the land had not been surveyed since the early 19th century, the challenge was to use modern technology and methods to pinpoint where the original boundaries were set by early surveyors.

Licensed surveyor Beau Thorley was grateful for the opportunity help those affected by the disaster and was moved by their experiences.

“What’s really shook me the most was actually being able to stop and have a chat with some of the landholders [and] hear some of the stories and emotion,” he said.

“I’m glad we can help in our own small way but I really can’t imagine what they went through that day.”

For the UniSA students, it was an invaluable opportunity to gain hands on experience and witness how surveyors contribute to communities in meaningful ways.

And with the boundaries set and ready for re-fencing, Pinery farmers can now move forward with confidence and start a new chapter.

Read more about the project here.