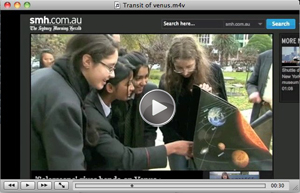 The Transit of Venus occurs when the Venus passes directly in front of the Sun which is an extremely rare occurrence, with the next transit not due to occur until 2117.

Lieutenant James Cook, an accomplished Surveyor and Navigator who was sent to Tahiti on HMS Endeavour to observe and record the Transit of Venus in 1769. Using Navigation, Astronomy and Surveying principles, measurements were taken and analysed to help calculate the size of the solar system using Kepler’s 3rd law of planetary motion.

After the 1769 Transit, James Cook explored and charted the east coast of Australia making his voyage both scientifically important and historically monumental for us today.

“The 18th century Transit of Venus was one of the great international experiments to determine the size of our solar system. Science builds on this tradition; today we use cutting edge surveying technology and maths to study the earth, from measuring sea level rises to earthquake prediction.” John Hearne, the Head of the School of Mathematical and Geospatial Sciences at RMIT University said.

Of this Patrick Meehan, Head of the Surveying Industry Promotion TaskForce said “We still look to the sky to continue this important work, however the star constellation used today are man-made satellites facilitating Global Positioning Systems (GPS).”

Modern Surveyors also use lasers and satellite imagery to provide reliable solutions to real issues faced across the community, be it in relation to property boundaries, infrastructure management or environmental decision making.

SolarScopes were sponsored by the Surveying and Spatial Science Industry to increase the awareness of Surveying and engage students in a historically rare event. Further, the project was designed to introduce the application of maths and science subjects to real world events, with the aim to increase the number of students undertaking these subjects and thus easing skill shortages in related professions.

See www.transitofvenus.com.au for more information on the 2012 Transit.